Posted on December 10, 2018 by thebookofworks

My favorite enzyme (see previous post about enzymes in general, and why I have a favorite) has a very specific job, as all enzymes do. But my enzyme, Aminoacyl tRNA Synthetase (or Syase for convenience) has a job that is both extremely difficult and absolutely crucial to all life.

The job is to link up two chemicals that otherwise would have no chance of getting together. The sad fact is that most chemical molecules are very unreactive, and only very few sets of molecules will react with each other to form new compounds or even a complex from the two joining together. In this case, one of the molecules is an amino acid, and the other is an interesting RNA molecule called transfer RNA or tRNA. Because of the very different chemical nature of these molecules, (they belong to very different chemical families) spontaneous, uncatalyzed combination of the two would simply never happen.

As you know (or you should), there are 20 amino acids, and about 60 tRNAs, so this is an impossible job to get right for one enzyme. Luckily, it turns out my favorite enzyme is not one enzyme but a collection of 20, one for each amino acid.

To explain why there are 60 tRNAs and not 20, we need a small diversion to discuss the genetic code (and yes, it is a code!). The genetic code works  much like written language, a code we know well, does. In English, for example, meaning is assigned to words, and there are 26 letters to construct these words (which can be of any length). A word is a collection of the letter symbols in the correct order that means something different from its physical nature (which is simply a collection of shapes).

DNA operates the same way, with some important differences. First, there are only four “letters,” which are actually molecular entities, but they function as symbols. Since their importance is in their symbolism, we generally designate them by the first letter of their names, A (for adenine), C (for cytosine), G (for guanine), and T for (thymidine). The word length is constant: three letters are a code word. For example, ACC is a code word for threonine, and CAA means glutamine.

So, why three, and not four or two? Well, two-letter words would allow for 16 permutations, not enough for the 20 amino acids. Four letters would give far more possibilities than needed and would cause confusion and chaos. So three letters, which gives 64 possible arrangements, is what we have. What this means is that there are synonyms, more than one word (or codon in Biologese) for each amino acid. Thus ACA, ACG and ACT also mean threonine, and CAG also codes for glutamine. Some amino acids have as many as 6 synonyms.

I am not going to discuss the details of how the proteins are built on the ribosome (see Figure 1 and online videos), but I need to tell you that the key step in making the right protein (meaning having the right amino acids in the right order) is for each tRNA/amino acid complex to bind to the codon copied from the DNA onto a long RNA strand called messenger RNA (mRNA). Now, if you read the post on how to be a molecular biologist, you will remember that the secret is that A always and only binds to T, and C only and always to G (even though this not actually true, but see the post if you forgot why). 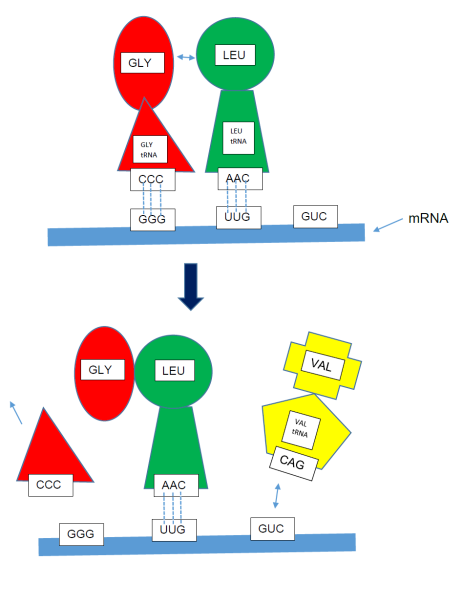 The point is that the tRNA for each amino acid contains a three-letter sequence designed to perfectly bind to the codon. That sequence is the complementary sequence of the codon, called the anticodon. So for the codon ACC, the anticodon is UGG. And for CAA, the anticodon is GUU. (One little detail, in RNA we use U instead of T. Doesn’t matter why.)

I should apologize for oversimplifying this whole thing. The reality is far more complicated, and you will notice that I haven’t even gotten to describe what it is that my favorite enzyme actually does. But I thought it was important to set the stage, as it were, and explain what the task it must do entails. Now that we have that all straight, I should (hopefully) get to how Syzase does its job (and if you think this is hard for you to understand, imagine how a poor senseless molecule feels!) in the very next post. I promise (sort of).

This entry was posted in Science. Bookmark the permalink.

7 Responses to My Favorite Enzyme, Part 2