The Atom and the Atonement: Why we need models in science and theology

Posted on November 17, 2016 by thebookofworks

A great article, related to much of my own thoughts, and briefly mentioned in the post “The Reasonable Ineffectivness of Mathematics in Biology” from July 12 of this year. The author Joe Ogborn, is a chemist and student minister at Cambridge.

If you ask a 14 year old, an 18 year old and an undergraduate to describe an atom you will get different answers. Ask them to draw an atom, and the discrepancies become even more noticeable.  A 14 year old will have no issues producing an image like the one below. The undergraduate is likely to look at you quizzically. “Draw an atom? You must be joking!” 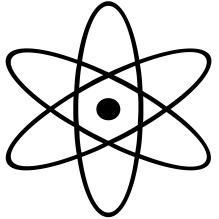 Chemistry, much like the other sciences, relies upon models. As students progress through their chemistry education they are introduced to increasingly complex models of the atom. Each model is used to explain the various chemical observations that students encounter.

From age 11 to 16, students work with an atomic model that can provide an (adequate) explanation of why sodium chloride’s structure is composed of positive sodium ions and negative chlorine ions in a…

This entry was posted in Uncategorized. Bookmark the permalink.

1 Response to The Atom and the Atonement: Why we need models in science and theology