Posted on September 5, 2016 by thebookofworks

The appearance of design suggests a designer. But how can we define the appearance of design? William Dembski, one of the founders of the Intelligent Design movement (ID), has subjected this question to some rigorous statistical treatment, with the intention of showing that biological creatures fit the definition of designed objects and therefore were specifically designed.

I don’t think there can be much argument with the idea that biological entities show evidence of design. Darwinian theory of natural selection agrees that all living creatures appear to be designed, and provides a mechanism for how this design appearance came to be.

The ID argument goes that if the probability of such characteristics arising without any intentional (or intelligent) input is sufficiently low, then it will have been proven that some form of design that does not use chance processes must have been involved. If you find a sandcastle on a beach, it is safe to presume that the structure was designed and built by some form of intelligence, simply because the alternative, that the windblown sand formed what we recognize as a sandcastle by chance, seems to be impossible. (Now we know that in fact it isn’t impossible, but the probability of this happening is extremely small, and therefore it is as good as impossible.) 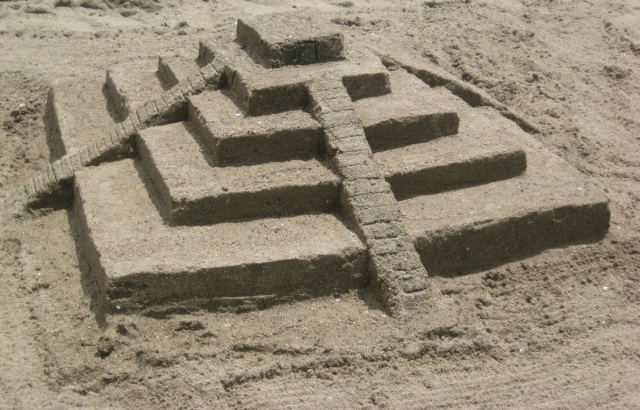 The difference between the sandcastle example (and its relatives, like the famous tornado blowing through the junk yard and building a 747 airplane) and Darwinian evolution is that with evolution, chance is only involved in the first step, the production of genetic variation. The enormous power of natural selection (as described by Dawkins in Climbing Mount Improbable) can indeed allow unexpected, very low-probability events to happen. But ID does have a valid point in focusing on the genetic variation part. Selection needs to have something to select. And it is not always clear how some biological structures or functions arose from previous forms simply by blind mutational chance. Some of the newer ideas in evolutionary theory (see previous posts on the EES) might go a long way to explaining this. In fact, the ID proponent Michael Denton acknowledges this in his latest book (see previous post on my review of the book at Biologos). So some parts of the ID worldview are not without merit.

In fact, and I don’t know if ID folks have used this argument, there is no question that ID exists in the world and has played a role in evolution. Nobody argues with this, and Darwin used it as the basis of his theory. Yes, I am talking about selective breeding for a purpose, and the intelligent agent in this case is us. We deliberately designed wine grapes, seedless watermelons, tasty tomatoes, faithful dogs, docile cattle, and so on. We haven’t created new species this way, nor whole new body plans, but we haven’t really tried to do that. With new genetic engineering techniques, we might get there. And of course, if we are believers, we know that whatever we can do, God can certainly do. But did He?

I think the real problem with ID is theological. It makes two assumptions about the nature of God that I believe are contrary to Christian (and other religious) thought. The first is that the existence and majesty of God as creator of everything is subject to scientific proof. I think that is a theological and scientific fallacy. The fact that ID has failed to convince most scientists that it has proven the existence of God is therefore beside the point, because such proof should in fact be impossible.

The second theological quarrel is with the nature of God as pictured by ID. If you found a complex watch, you could assume that the maker and designer of the watch was an intelligent human being, and you would be right. But suppose what you found was a rabbit. Paley didn’t know much about biology, not even a fraction of what we know today. But even in his day it was known that rabbits reproduce themselves, react to their environment, grow, consume food, and undergo very complex metabolic chemical reactions.

A rabbit makes a watch look pretty simple. Certainly no human, no matter how intelligent, could design a rabbit. I agree that life is designed. But by calling this design “intelligent”, the way a human designer of watches or computers or aircraft is intelligent, we demean its nature. The more we learn about life, the more we understand that the design of life is far more than that. Life was designed by the creator. It is divine design, not intelligent design, and the mechanisms by which life was designed and created are not currently within our ability to understand.

I don’t know if we will ever get there, but I do think it is worth trying to find pointers to the actions of the living God, because doing so will help us reconcile our faith with the truths that we learn about the universe using scientific tools. But not to prove the existence or creativity of God. That is not provable, and needs no proof. We start with the premise that God exists and created the universe, and that His presence is real in the world and in our lives.

This entry was posted in Uncategorized. Bookmark the permalink.

5 Responses to Intelligent or Divine Design?